A:Because C is all about execution speed. Setting static variables to default values is a one time cost, while defaulting auto variables might add a signficant runtime cost.Memsetting the global data segment to 0 however, is a one time cost that happens at start up.

Q:Why don’t the C standard require that you always get a warning or error on invalid code?

A:One of the design goals of C is that it should be relatively easy to write a compiler. Adding a requirement that the compilers should refuse or warn about invalid code would add a huge burden on the compiler writers.

It is sometimes useful to assume that a C program uses a memory model where the instructions are stored in a text segment, and static variables are stored in a data segment. Automatic variables are allocated when needed together with housekeeping variables on an execution stack that is growing towards low address. The remaining memory, the heap is used for allocated storage.The stack and the heap is typically not cleaned up in any way at startup, or during execution, so before objects are explicitly initialized they typically get garbage values based on whatever is left in memory from discarded objects and previous executions. In other words, the programmer must do all the housekeeping on variables with automatic storage and allocated storage.And sometimes it is useful to assume that an activation record is created and pushed onto the execution stack every time a function is called. The activation record contains local auto variables, arguments to the functions, and housekeeping data such as pointer to the previous frame and the return address.

Q:In C. Why is the evaluation order mostly unspecified?

A:Because there is a design goal to allow optimal execution speed on a wide range of architectures. In C the compiler can choose to evaluate expressions in the order that is most optimal for a particular platform. This allows for great optimization opportunities.

Integer overflow gives undefined behavior. If you want to prevent this to happen you must write the logic yourself. This is the spirit of C, you don’t get code you have not asked for. 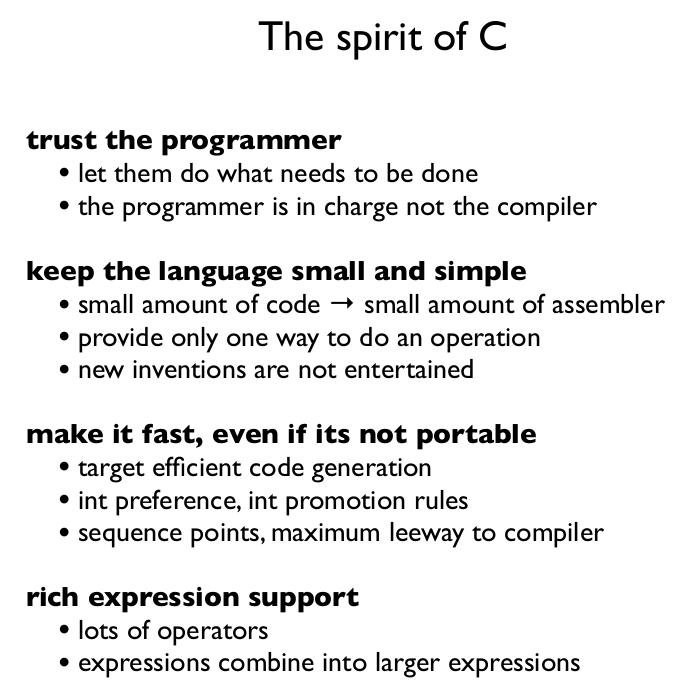 Q:Why the “main” method is the program entrance and is static?

A: “static” means that the method is part of its class, not part of objects.Why is that? Why don’t we put a non-static method as program entrance?If a method is not static, then an object needs to be created first to use the method.Because the method has to be invoked on an object. For an entrance, this is not realistic. Therefore, program entrance method is static.The parameter “String[] args” indicates that an array of strings can be sent to the program to help with program initialization.

Q:How JVM loads the class and invoke the main method?

This loading job is done by Java Classloaders. When the JVM is started, three class loaders are used:

Finally, the main() frame is pushed into the JVM stack, and program counter(PC) is set accordingly. PC then indicates to push println() frame to the JVM stack. When the main() method completes, it will popped up from the stack and execution is done.

Ref:When and how a java class is loaded and initialized