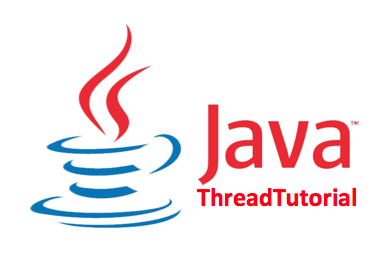 Every java application has at least one thread – main thread. Although there are so many other threads running in background like memory management, system management, signal processing etc. But from application point of view – main is the first thread and we can create multiple threads from it.

Multithreading refers to two or more threads executing concurrently in a single program. A computer single core processor can execute only one thread at a time and time slicing is the OS feature to share processor time between different processes and threads.

Once we start any thread, it’s execution depends on the OS implementation of time slicing and we can’t control their execution. However we can set threads priority but even then it doesn’t guarantee that higher priority thread will be executed first.

As you have noticed that thread doesn’t return any value but what if we want our thread to do some processing and then return the result to our client program, check our Java Callable Future.

java.lang.Thread sleep() method can be used to pause the execution of current thread for specified time in milliseconds. The argument value for milliseconds can’t be negative, else it throws IllegalArgumentException.

There is another method sleep(long millis, int nanos) that can be used to pause the execution of current thread for specified milliseconds and nanoseconds. The allowed nano second value is between 0 and 999999.

Java Thread join method can be used to pause the current thread execution until unless the specified thread is dead. There are three overloaded join functions.

Below diagram shows different states of thread in java, note that we can create a thread in java and start it but how the thread states change from Runnable to Running to Blocked depends on the OS implementation of thread scheduler and java doesn’t have full control on that. 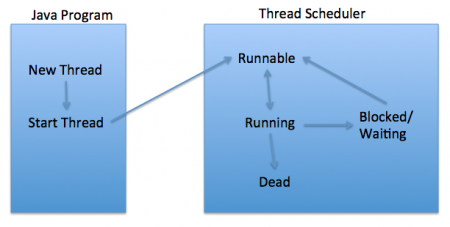 Notice that hacker’s code is trying to lock the myObject instance and once it gets the lock, it’s never releasing it causing doSomething() method to block on waiting for the lock, this will cause system to go on deadlock and cause Denial of Service (DoS).

Notice that lock Object is public and by changing it’s reference, we can execute synchronized block parallel in multiple threads. Similar case is true if you have private Object but have setter method to change it’s reference.

Notice that hacker code is getting lock on class monitor and not releasing it, it will cause deadlock and DoS in the system.

These are some of the common java exceptions in thread main, whenever you face any one of these check following:

Singleton is one of the most widely used creational design pattern to restrict the object creation by applications. In real world applications, resources like Database connections or Enterprise Information Systems (EIS) are limited and should be used wisely to avoid any resource crunch. To achieve this, we can implement Singleton design pattern to create a wrapper class around the resource and limit the number of object created at runtime to one.

In general we follow below steps to create a singleton class:

If we don’t set the thread to be run as daemon thread, the program will never terminate even after main thread is finished it’s execution. Usually we create a daemon thread for functionalities that are not critical to system, for example logging thread or monitoring thread to capture the system resource details and their state.

As you can see from the output that Thread-0 has changed the value of formatter but still thread-2 default formatter is same as the initialized value.

Java comes with jstack tool through which we can generate thread dump for a java process. This is a two step process.

How to Analytize Deadlock and avoid it in Java

Deadlock is a programming situation where two or more threads are blocked forever, this situation arises with at least two threads and two or more resources.

For analyzing deadlock, we need to look out for the threads with state as BLOCKED and then the resources it’s waiting to lock, every resource has a unique ID using which we can find which thread is already holding the lock on the object.

These are some of the guidelines using which we can avoid most of the deadlock situations.

java.util.Timer is a utility class that can be used to schedule a thread to be executed at certain time in future. Java Timer class can be used to schedule a task to be run one-time or to be run at regular intervals.java.util.TimerTask is an abstract class that implements Runnable interface and we need to extend this class to create our own TimerTask that can be scheduled using java Timer class.Timer class is thread safe and multiple threads can share a single Timer object without need for external synchronization. Timer class uses java.util.TaskQueue to add tasks at given regular interval and at any time there can be only one thread running the TimerTask, for example if you are creating a Timer to run every 10 seconds but single thread execution takes 20 seconds, then Timer object will keep adding tasks to the queue and as soon as one thread is finished, it will notify the queue and another thread will start executing.

The output confirms that if a task is already executing, Timer will wait for it to finish and once finished, it will start again the next task from the queue.

Timer object can be created to run the associated tasks as a daemon thread. Timer cancel() method is used to terminate the timer and discard any scheduled tasks, however it doesn’t interfere with the currently executing task and let it finish. If the timer is run as daemon thread, whether we cancel it or not, it will terminate as soon as all the user threads are finished executing.

While scheduling tasks using Timer, you should make sure that time interval is more than normal thread execution, otherwise tasks queue size will keep growing and eventually task will be executing always.

java.util.concurrent.BlockingQueue is a Queue that supports operations that wait for the queue to become non-empty when retrieving and removing an element, and wait for space to become available in the queue when adding an element.

BlockingQueue doesn’t accept null values and throw NullPointerException if you try to store null value in the queue.BlockingQueue implementations are thread-safe. All queuing methods are atomic in nature and use internal locks or other forms of concurrency control.

While implementing producer consumer problem, we will use ArrayBlockingQueue implementation and following methods are important to know.

A thread pool manages the pool of worker threads, it contains a queue that keeps tasks waiting to get executed.

A thread pool manages the collection of Runnable threads and worker threads execute Runnable from the queue.

In last few posts, we learned a lot about java threads but sometimes we wish that a thread could return some value that we can use. Java 5 introduced java.util.concurrent.Callable interface in concurrency package that is similar to Runnable interface but it can return any Object and able to throw Exception.

FutureTask is base concrete implementation of Future interface and provides asynchronous processing. It contains the methods to start and cancel a task and also methods that can return the state of the FutureTask as whether it’s completed or cancelled. We need a callable object to create a future task and then we can use Java Thread Pool Executor to process these asynchronously.

When we run above program, you will notice that it doesn’t print anything for sometime because get() method of FutureTask waits for the task to get completed and then returns the output object. There is an overloaded method also to wait for only specified amount of time and we are using it for futureTask2. Also notice the use of isDone() method to make sure program gets terminated once all the tasks are executed.