Android uses Java as a platform for development. This helps us with many low level issues including memory management, platform type dependencies, and so on. However we still sometimes get crashes with OutOfMemory. So where’s the garbage collector?

I’m going to focus on one of the cases where big objects in memory can’t be cleared for a lengthy period of time. This case is not ultimately a memory leak – objects will be collected at some point – so we sometimes ignore it. This is not advisable as it can sometimes lead to OOM errors.

The case I’m describing is the Handler leak, which is usually detected as a warning by Lint. 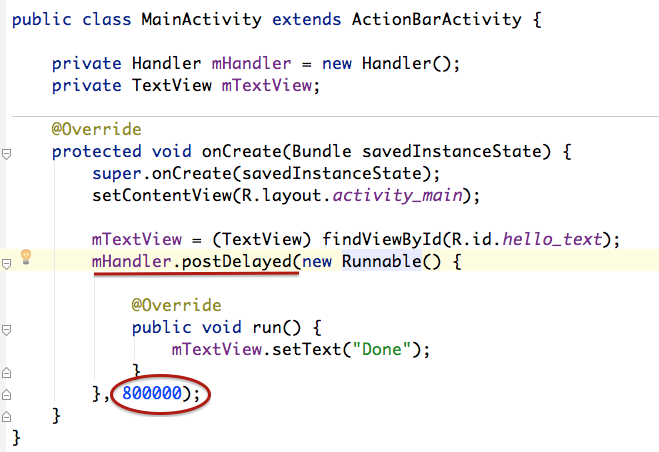 This is a very basic activity. Notice that this anonymous Runnable has been posted to the Handler with a very long delay. We’ll run it and rotate the phone couple of times, then dump memory and analyze it. 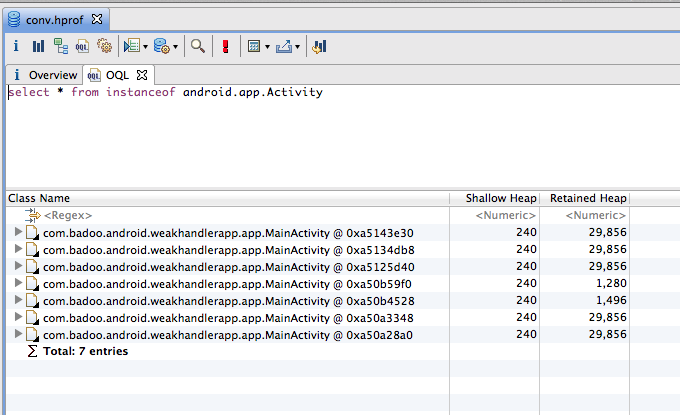 We have seven activities in memory now. This is definitely not good. Let’s find out why GC is not able to clear them.ps.The query I made to get a list of all Activities remaining in memory was created in OQL (Object Query Language), which is very simple, yet powerful.

Once you post Runnable or Message into Handler, it’s then stored in list of Message commands referenced from LooperThread until the message is executed. Posting delayed messages is a clear leak for at least the time of the delay value. Posting without delay may cause a temporary leak as well if the queue of messages is large.

Let’s try to overcome a memory leak by getting rid of this$0, by converting the anonymous class to static. 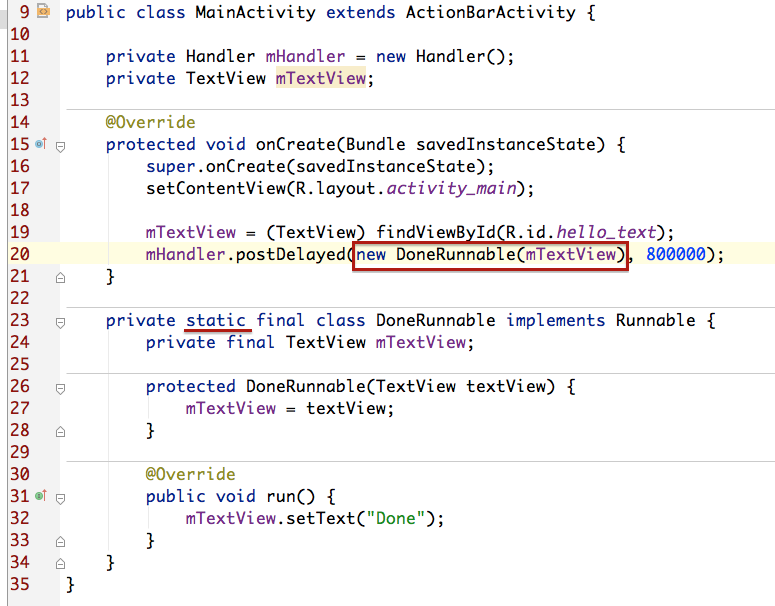 Run, rotate and get the memory dump.

What, again? Let’s see who keeps referring to Activities.

Take a look at the bottom of the tree – activity is kept as a reference to mContext inside mTextView of our DoneRunnable class. Using static inner classes is not enough to overcome memory leaks, however. We need to do more.

Let’s continue using iterative fixes and get rid of the reference to TextView, which keeps activity from being destroyed. 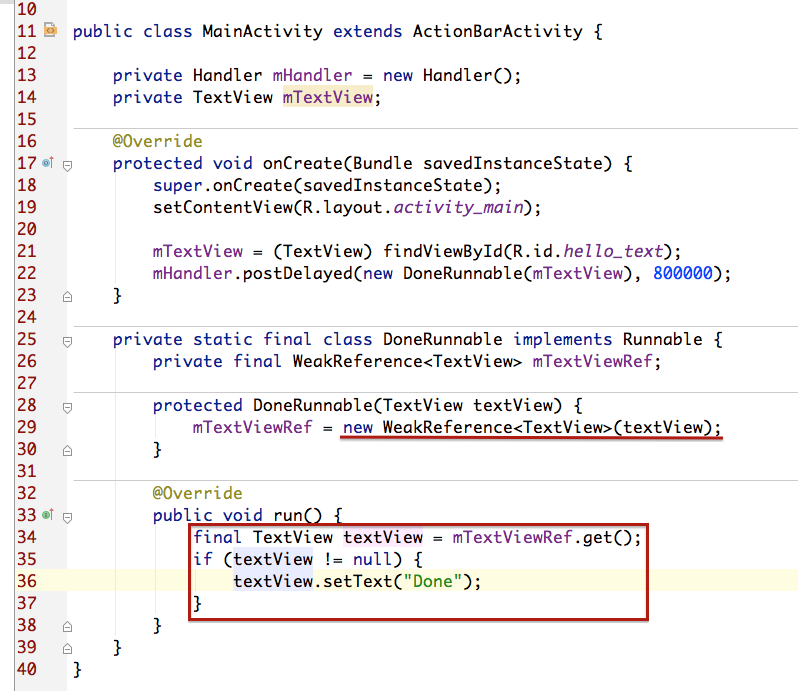 Note that we are keeping WeakReference to TextView, and let’s run, rotate and dump memory.Be careful with WeakReferences. They can be null at any moment, so resolve them first to a local variable (hard reference) and then check to null before use.

Hooray! Only one activity instance. This solves our memory problem.

So for this approach we should:

If you compare this code to the initial code, you might find a big difference in readability and code clearance. The initial code is much shorter and much clearer, and you’ll see that eventually, text in textView will be changed to ‘Done’. No need to browse the code to realise that.

Writing this much boilerplate code is very tedious, especially if postDelayed is set to a short time, such as 50ms. There are better and clearer solutions.

Handler class has an interesting feature – removeCallbacksAndMessages – which can accept null as argument. It will remove all Runnables and Messages posted to a particular handler. Let’s use it in onDestroy. 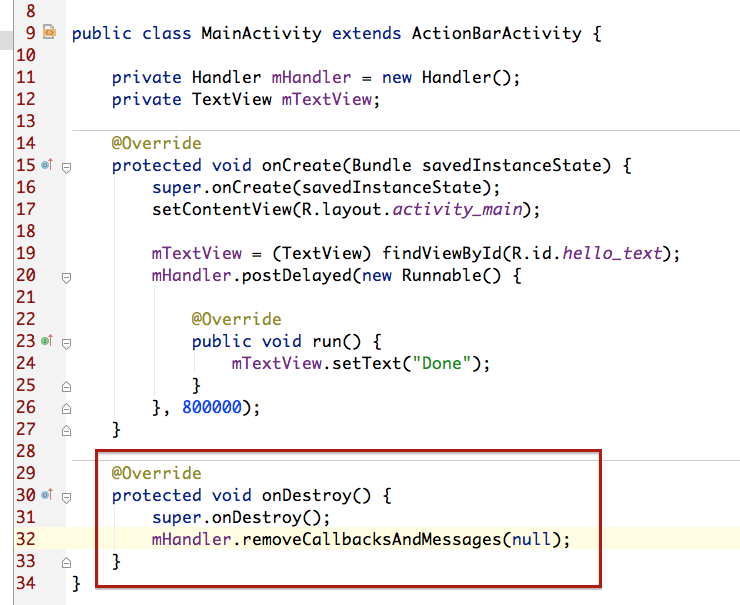 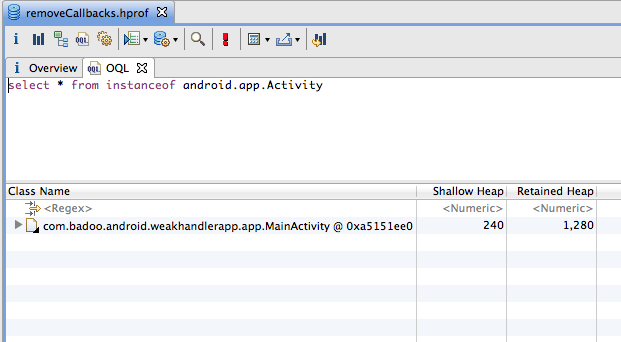 Good! Only one instance.

This approach is way better than the previous one, as it keeps code clear and readable. The only overhead is to remember to clear all messages on activity/fragment destroy.

The Badoo team came up with the interesting idea of introducing WeakHandler – a class that behaves as Handler, but is way safer.

It takes advantage of hard and weak references to get rid of memory leaks. I will describe the idea in detail a bit later, but let’s look at the code first: 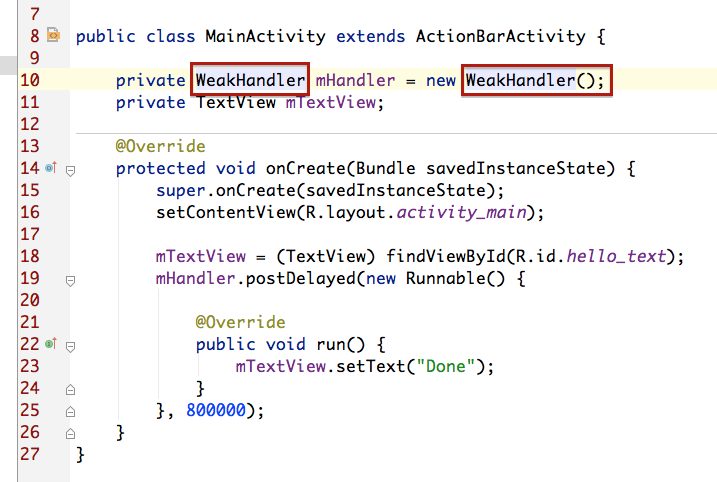 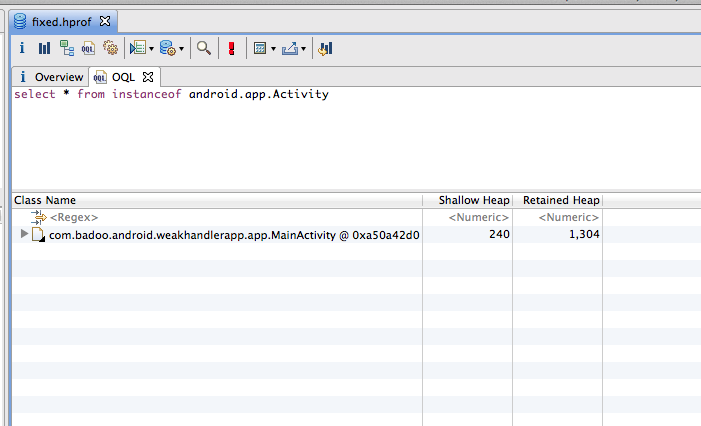 Nice, isn’t it? The code is cleaner than ever, and memory is clean as well! :)

To use it, just add dependency to your build.gradle:

And import it in your java class:

Visit Badoo’s github page, where you can fork it, or study it’s source code.

Here is a simple diagram that demonstrates differences between using normal Handler and WeakHandler to post anonymous runnables: 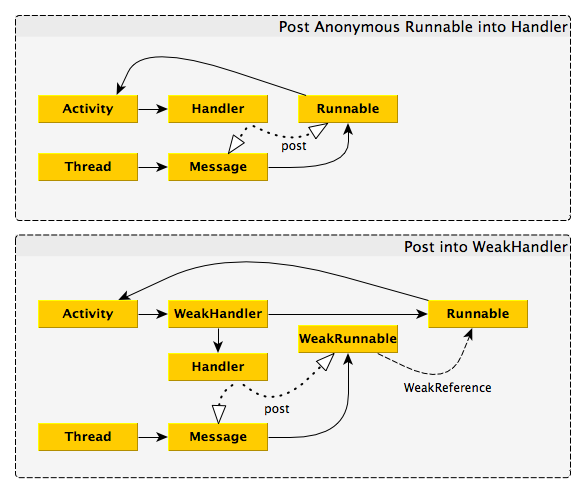 Looking at the top diagram, Activity keeps a reference to Handler, which posts Runnable (puts it into queue of Messages referenced from Thread). Everything is fine except the indirect reference from Runnable to Activity. While Message is in the queue, all graphs can’t be garbage-collected.

By comparison, in the bottom diagram Activity holds WeakHandler, which keeps Handler inside. When we ask it to post Runnable, it is wrapped into WeakRunnable and posted. So the Message queue keeps reference only to WeakRunnable. WeakRunnable keeps weak reference to the desired Runnable, so the Runnable can be garbage-collected.

Another little trick is that WeakHandler still keeps a hard reference to the desired Runnable, to prevent it from being garbage-collected while WeakRunnable is active.

The side-effect of using WeakHandler is that all messages and runnables may not be executed if WeakHandler has been garbage-collected. To prevent that, just keep a reference to it from Activity. Once Activity is ready to be collected, all graphs with WeakHandler will collected as well.

Using postDelayed in Android requires additional effort. To achieve it we came up with three different methods:

It’s up to you to choose your preferred technique. The second seems very reasonable, but needs some extra work. The third is my favourite, obviously, but it require some attention as well – WeakHandler should not be used without hard reference from outside.