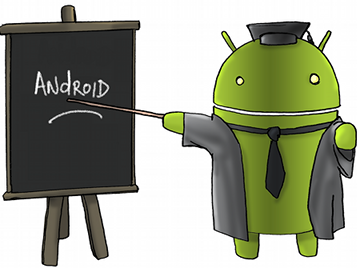 Today we will talk about saving and restoring View states in Android. I intentionally want to keep our focus on Android Views state just because I found this process just a little bit trickier than saving your Activity or Fragment state. Plus I think I’ve seen enough of re-invented wheels (sometimes really ugly ones) throughout the internet.

Why do we need to save View state? 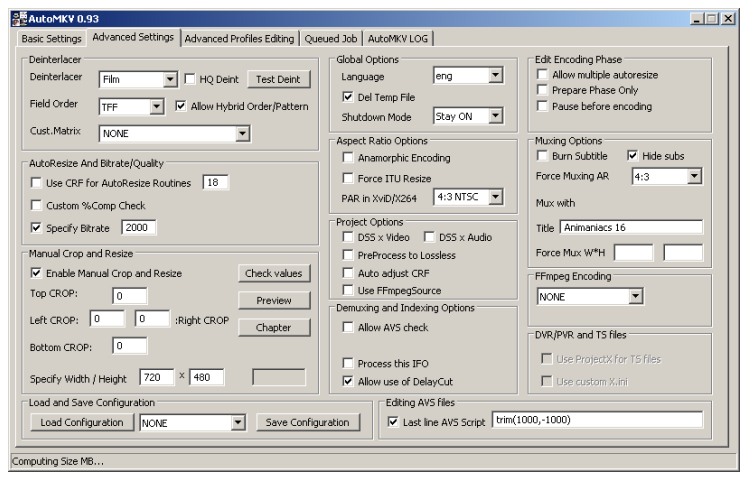 This sample is not really a mobile device screenshot, but good for illustration purposes :) You have a lot of text fields, checkboxes, switches, etc. And you spent ~15 minutes trying to fill in all these fields. You almost there – almost hit that shiny “Done” button, but accidentally you rotate the screen and… wait for it…. your changes gone. Everything is back to its original state.

Sure, there is a subset of users who just love your app no matter what (your mom maybe) and will be happy to take another round completing your form. But let’s be honest to oureselves – it is the right path to be uninstalled right away (or even worse – mad croud of users with torches and pitchforks start ringing your doorbell).

So let’s do the right thing and help our users! That’s right! We need to save user’s changes until user exlicitly asks us not to.

How do I save a View state?

Let’s have a simple layout with image, text and one Switch toggle:

Super simple layout as you can see. But now when I switch toggle and then change screen orientation – my toggle is back to its original state :(

Android usually saves states of such views automatically. But why it didn’t work in our case?

Let’s take a step back and try to figure out how does Android manage View states. Here is what the normal save/restore process looks like:

The really important part of understanding this process is that container is shared for the entire view hierarchy. We will see why it is so important in a bit.

So now we know that since View’s state is saved based on it’s ID – if View doesn’t have an ID – it’s state will not be saved into container. There is no point of saving it – we will not be able to restore state anyways since we don’t know which View this state belongs to.

Looks like that’s the reason why our toggle state is not saved! Let’s try to add an id to our toggle (and other views):

And here we go! It actually works! My state is preserved between configuration changes. Here is what our SparseArray looks like: 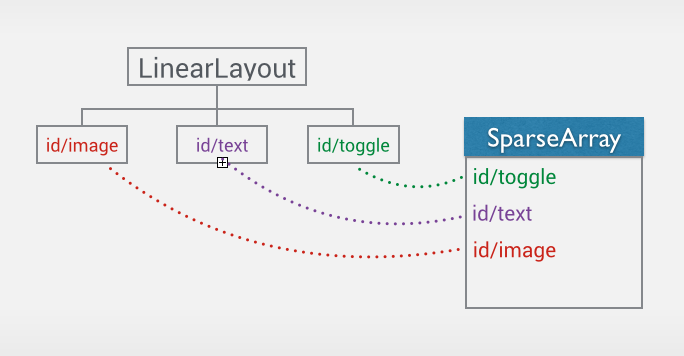 As you can see, each view which have an ID stores its state into SparseArray container. You ask how did it happen – we didn’t actually provide any Parcelable as a state. And the answer is – Android took care of that. Android knows how to save state of it’s built-in widgets.

In addition to ID, you should explicitly tell Android that your view wants to save its state. To do so – simply call setSaveEnabled(true). You don’t usually need to do this for built-in widgets, but if you develop custom view from scratch – you might need to enable it manually.

To save View state at least 2 criterias should be met:

So now we know how to save state of built-in widgets. That’s awesome, but what if we have some custom state and we want to preserve this state between configuration changes?

Now let’s take a bit more complicated example. I want to extend my Switch and add my custom state to it:

Here is how I will be saving this state:

Let me explain what I just did.

First of all, since I override onSaveInstanceState, I have to call a supper method to let my super class save everything it wants to. In my case Switch will create a Parcelable, put state of the toggle and return it to me. Unfortunately, I cannot add some more states to this parcelable, so I need to create a wrapper around this super state and put my additional state to it. There is a handy class (View.BaseSavedState) in Android that does just that – saves super state and allows you to save your custom attributes by extending it.

View IDs should be unique

Now I decided to reuse my awesome layout by separating it into custom view and including it within another layout couple of times:

But when I change configuration – my states are all messed up! Let’s see what we have in our SparseArray: 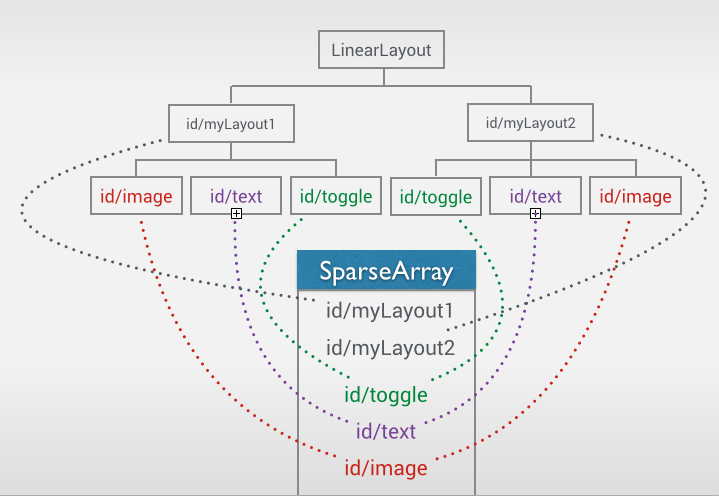 Aha! Since states are stored based on view ID and SparseArray container is shared between entire view hierarchy – view IDs should be unique! Otherwise your state will be overwritten by another view with the same ID. In my case I have 2 views with id @id/toggle, so my states container holds only 1 instance of it – whichever came last during state store process. Now when it is time to restore state – both views will get the same state from the container.

How do we solve it you ask?

The quick answer to that – have seperate SparseArray containers for each set of children, so states do not overlap: 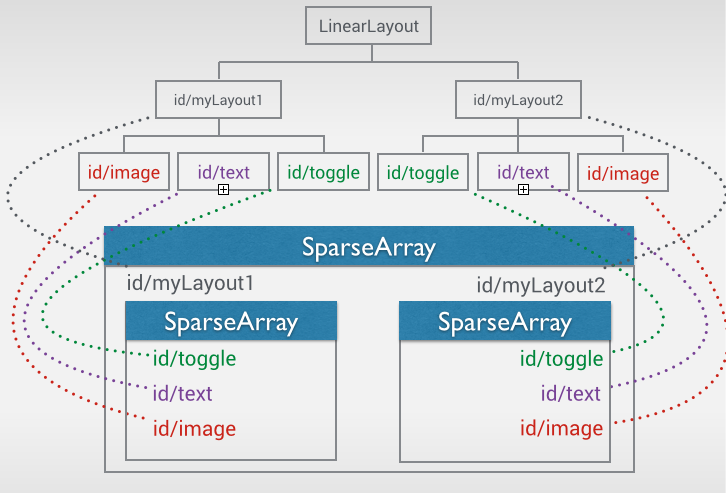 As we can see, each view group is now in a separate SparseArray, so they don’t overlap and don’t override each other.

As usual, source code for this article can be found on GitHub.